On the board of Caye International Bank, Ltd. on Ambergris Caye, Belize, Peter Zipper is a leading expert on offshore banking and investment centers. Recently retired, Peter was the President of Caye Bank from 2006 – 2018 and has over 30 years experience in International Banking.

After high school, Peter graduated from the Geographic Institute in Vienna, Austria with a Degree in Geography and Cartography. He then enrolled in and attended the Austrian National Military Academy. He served in active duty with the United Nations Peace-Keeping Force during the conflict in Cyprus. Later, Peter retired from the military with honors as an infantry officer.

After graduating from Staron Flight Academy in Vancouver, Canada, Peter worked actively during the 1970s as a commercial pilot throughout Northern Canada, Nigeria, and Costa Rica. He subsequently retired from aviation and later received his International Finance Education at the University of Alberta in Edmonton, Canada. Then he began his lifelong career in global Finance.

During his incredible career, Peter has had the privilege of living and working in the Americas, Europe, and Asia, where he’s held top positions at several multinational financial institutions. 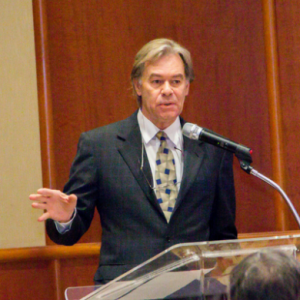 Peter is not only a popular commentator, but he’s also an in-demand speaker. His talks are focused on international, geopolitical, and financial issues all over the world.

Over the years, Peter has lectured at thousands of international events and conferences. He’s also been a guest speaker on many English and German radio and television shows.

Those of us at ECI Development are extremely proud of all the success of Caye Bank and give our heartfelt congratulations on their most recent awards. This year alone, Caye Bank is honored to receive the award as “Best Private Bank in Belize 2018”, and they have also received the prestigious honor of being named the “Most Outstanding Offshore Banking Institute in Central America for 2018”.

About the Author: Jamie Cain

Jamie Cain is a native Texan. She has a Bachelor’s Degree in Finance, and after graduating college, she began a career in modeling. “This was an incredible experience, as I had the opportunity to work and live in many amazing countries and experience all the different cultures.” After, she started a career in real estate in Dallas. Fast forward to 2017, she had the wonderful opportunity to join ECI Development as a Property Advisor for Nicaragua and Belize. Presently, Jamie lives on the East Coast with her husband and two white cats. She enjoys yoga, blogging, photography, and cooking.