DIVERSIFY NOW WHILE THE GETTING IS GREAT

Wise words. I was in the car recently listening to the radio when I heard an ad about a deal that offered listeners a 20% ROI backed by property in New Jersey and Florida. Huh?

Hold on. This investment ad was on the radio and they were kicking around a 20% return like they were selling two Big Macs for $5? I gotta say, it felt like 2007 all over again. And when I got home and started digging into the relevant data, it starting to look like it too.

Recently my friends and colleagues in the investment world have been writing about the state of the stock market. They cite the high P/E ratios and the frothy nature of the prices there too. Yes, the economy is growing nicely and hit 4% for the most recent quarter. This is the best growth since 2014, and some analysts are saying the 2018 annual number could exceed 3%, the best since 2004. Inflation is under 2%. Unemployment is low too at 4.1%. So, it would seem that the times are great and that the markets can keep on going like this. But can they?

For the past few years, the markets have been doing especially well. This doesn’t give investors much incentive to increase their diversification because they’re just seeing returns doing what they have been doing. But what goes up, must come down. I hope that we’ve learned that much from history. Bull markets are prone to periods of sizable drops, erasing gains. Wise investors are looking to adjust their portfolios in some way to hedge against upcoming, inevitable drops because markets cycle.

While the ad for the 20% ROI wasn’t being given by a shoe shine boy, it felt about the same. Just a simple extrapolation of the 20% ROI mentioned in the radio ad should be enough to give us pause. A long pause.

Do the math. A 20% compounding return is a doubling of value every 3.5 years. Do we really think that the prices of real estate in Hoboken and Delray Beach will be twice as expensive in a few years? This is madness, the same madness that let anyone and everyone get 102% mortgages on condos. This was a great deal since buyers could walk away from closing with $5 grand in their pocket and a mortgage for a condo that they could never afford to pay.

You might want to look at an article I wrote on the topic in the fall with some great quotes and a video clip from the movie, The Big Short.” Click Here. Are we nearing the same kind of heady days now? Maybe. But it probably won’t look the same.

Wall Street and the Fed are certainly wiser for the 2008 experience. I doubt the crash will follow the same path or heads will roll. But I still don’t trust those guys. The house always wins, and they are quite a house. 20% gain investments being advertised on the radio? This is a signal to me something is very, very wrong.

Let’s talk about the stock market where we are seeing all-time highs. Sure it’s been higher than where it is today, but just not much compared to NASDAQ lows below 1300 in 2009. One analyst from Bank of America says we are on track for an 8000 NASDAQ, up from about 7700 today.

OK. But what then? When we look at the chart below we can plainly see that we are far above highs from 1999 and 2008. How much higher can the market go before we see a correction? We all wish it would go “a lot higher.” But can it? 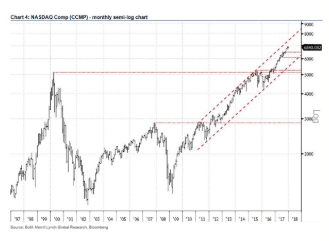 Psychologically it’s difficult to know when to take money off the table. Greed is a powerful motivator. It’s also a powerful blinder. When the markets are running high, we feel like it it’s going to last forever. When they are low, we think the sky is falling and it will be dark forever.

These feelings are what prompt the failed investment philosophy of buy high, sell low. Many/most people wait too long to get in and then get out along the yellow colored line on the right side of the chart below where it says, “Panic.” These feelings are hard to overcome. That’s why most investors get whipsawed by big moves in the market.

So, what to do? It’s simple. Diversify some of your investments … Right now.

Take part of your gain off the table. It’s simply wise and prudent to spread some of the profit into other baskets. There’s a saying about that too by the way. If you’ve made money in the U.S. stock markets and domestic real estate during the last 10 years, take some money off the table and into something else. Something different. Something outside the masses.

But let’s be real. Hindsight is 20-20. Think back to the millions of folks who had trillions of dollars in the market in 2007. You might have been one of them. I was. Most of us wish we’d taken just part, perhaps 25%, of our money off the table and invested it outside the traditional markets back then. I was lucky. As a person working overseas in global investments, I only had about 20% of my portfolio in the U.S. markets. I was protected because my natural inclination is to be global heavy in my investments.

For traditional North American investors, there were sages calling for diversification. A friend of mine, Steve Sjuggerud was one of them. People who heeded his call when he was writing about investments into farmland did very well. An investment in that sector or into the hard asset itself in 2007 would have yielded huge profits instead of losses of 50% or more riding the stock market elevator to the basement in 2009. Farm land and non-traditional investments that are counter cyclical are great hedges for a down market. 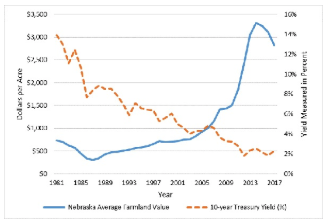 But farm land prices have run up pretty high in the U.S. and Canada. There’s only so much production one can get off an acre of land to support high property prices. What other areas of non-traditional investments are out there where yield is likely and profits?

The simple answer is that there are many investments out there and it’s not so much which one you pick, it’s more that you pick a bunch of them and diversify. Steve recently wrote about this exact topic. His point is that simply by diversifying, we can get a better return over the long term. And he’s right. While being heavy into U.S. stocks the past decade has rewarded investors, it’s less likely to do so in the next decade.

Getting some “outside the U.S.” diversification makes sense. There are many ways to do this, and one is to stay in the traditional markets and buy foreign stocks. This works for many people but leaves a lot of money on the table. For many, taking some of their investment portfolio and going directly to the source makes a lot of sense.

For example, ECI has a private offering for accredited investors where people can own a part of our development company as an equity partner. ECI owns over 4,000 acres and 5 miles of beach front property in 4 countries of Central America. These extremely valuable hard assets have done well in the past 20 years as homes, hotels, and condominiums are built, the cash flow grows. As we expand into other properties in other countries, corporate assets will grow, and our shareholders will benefit from increased value and revenues. Read more about who we are, our track record, the team, the real estate, and our planned IPO in the ECI Executive Summary.

But ECI is not the only opportunity out there, of course. Just the one that I’m most familiar with and proud to say I helped start and lead for 20 years. If you know me, you know I don’t push. As a Libertarian, I believe people don’t need pushing. They can draw their own conclusions from an examination of the facts.

That said, a reader wrote to me recently to say:

I just heard congratulations are in order. The contract signing from the hotel chain is awesome news. Still kicking myself for investing in (project X) and not Mike Cobb, but we wanted to be on the mainland not Ambergris Caye. The new team at (project X) has us very concerned that the development will be bankrupt soon. Anyway, with that money tied up at (project), as we purchased with cash, I don’t think we can take advantage of your project now, but I didn’t want to just assume that would be the case.

Can you please have Rachel resend us the details, including the financing options. We’d love to jump on board, at the very slight chance we can pull this off.

So, I won’t push you, but you may want to take a serious look at what we are doing. There are other companies raising private capital in the region. There are resort properties, hard money loans, condominiums, branded residences, bed & breakfasts, and development opportunities for people who want to get outside the box and diversify globally.

These are investments that most others pass over. But you have access to the information. You can go global. Investing offshore takes courage. As Winston Churchill said, “Fear is a reaction. Courage is a decision.”

Courage is a decision. It takes courage to invest outside the masses and move forward in a new direction even when the current state of affairs seems right on track. Investing overseas? Even more courage.

Looking and exploring for new opportunities is a great thing to do while the status quo in the stock market holds. You have a small window right now to examine ideas that might make sense in a diversification plan. Rather than panicking and grabbing at straws when the markets are falling, you can plan your actions with measured care and foresight. The best decisions are made when all angles are considered, and all the facts weighed properly.

Request a copy of the ECI Executive Summary to get a taste of what excellent global opportunities look like. If you like what you see, let us know and we’ll find a time to see if an investment makes sense for you.