DAY OF SERVICE FOR ECI SHAREHOLDERS – BEACH CLEAN UP 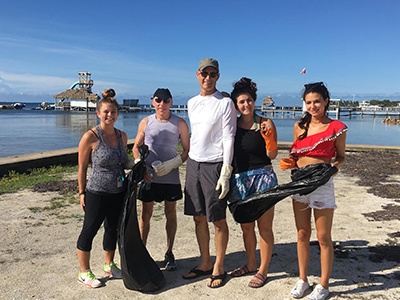 This year, Grand Baymen has put a big focus on improving and caring for our environment, and at ECI Development’s annual shareholders meeting this past week, that focus was put into action during the traditional “Day of Service” that concludes the shareholders meeting. Many shareholders, along with their families and ECI Development staff members gave up the extra hour of sleep to participate in a beach cleanup on and around the current Exotic Caye Beach Resort.

Despite the warm weather and strong sunshine, 11 participants gathered early Friday morning outside of the Belize Marriott Residences Sales Office, where they received gloves and garbage bags.

The group chose the “divide-and-conquer” method to cover as much ground as possible before it became too hot.  It was amazing to see the amount of garbage that was collected over a short period of time, only an hour. Some of the most common items picked up on Friday included plastic water and soda bottles, plastic straws, Styrofoam to-go containers, and bottle caps. After just one hour of cleaning, the group managed to fill 6 large bags full of garbage. 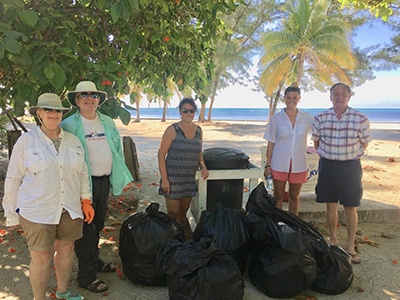 Although it can be frustrating to see so much garbage collected in just one space on such a beautiful island, efforts such as this, are becoming more and more common throughout the island.

Most recently, the American Crocodile Education Sanctuary (ACES) along with concerned residents have initiated monthly mangrove cleanups, and it is not at all uncommon to see other such groups of environmentally minded individuals out early on a weekend morning, cleaning the beaches. 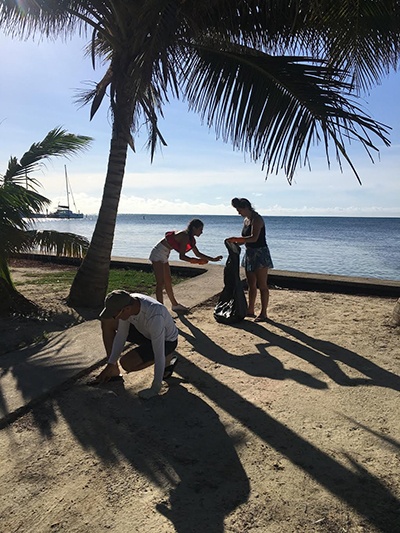 Other local initiatives to make San Pedro “green” included the San Pedro EcoRangers “Minion” garbage cans that can be seen around town, as well as the new recycling containers for plastic bottles that are popping up throughout the island, including one at Grand Baymen.

These local initiatives, paired with the recent government proposal to phase out single use plastic bags, Styrofoam containers, and plastic utensils by April 22, 2019, mean a greener future for the Mesoamerican Barrier Reef, Ambergris Caye, and Belize as a whole. In case you missed the full article on the ban of single use plastics, you can check it out here.