The numbers are in! Costa Rica has officially been ranked as the happiest as well as the healthiest country in Latin America. At least, that is according to two recent surveys published by Bloomberg Rankings. Costa Rica already has so much going for it, such as being extremely biologically diverse, having a rich and inviting and culture, and being a major medical tourism destination for North Americans. Now with the distinction of being the happiest and healthiest country in Latin America, a trip to Costa Rica, for vacation or retirement, is looking better than ever before.

The study took in data from 145 different countries. It ranked them on such factors as life expectancy, percentage who survive to 65, percentage who smoke, and percentage who are obese. Costa Rica ranks 1st in terms of healthiness in Latin America, and it ranks 24th globally. (In case you were wondering, the United States ranks 33rd.) 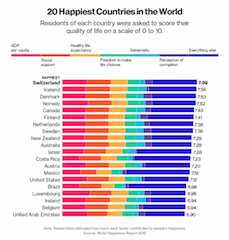 In addition to being the healthiest, Costa Rica also takes the distinction of being the happiest country in Latin America. A survey, also by Bloomberg, released earlier this year ranked the different countries of the world based on their levels of happiness. The subjective term of happiness was calculated using such factors as GDP per capita, freedom to make life choices, generosity, and of course healthy life expectancy. Despite having a significantly lower GDP per capita than the other high-ranking countries, Costa Rica remains one of the happiest. It comes in at 11th happiest globally.

According to a different survey, published by the Happy Planet Index, Costa Rica actually ranks 1st in the entire world in happiness. The Happy Planet survey takes much more heavily into account the ecological footprint of a country, and this is probably why Costa Rica shot up to 1st place in their survey.

Why are Costa Ricans so Dang Happy and Healthy? 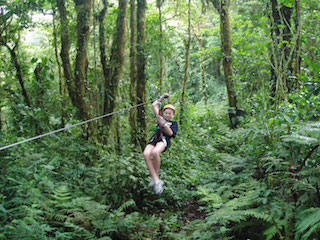 Costa Rica has a lifestyle dedicated to happiness and healthiness. The country has not had a standing army since 1949, when its constitution formally banned having one. It is even home to the United Nations University for Peace. A common greeting in Costa Rica is pura vida, meaning “pure life”. This is a great representation of the peaceful and healthy lifestyle that Costa Ricans extol.

Costa Ricans have healthy diets. Gallo Pinto, which is rice and beans, is at the heart of most Costa Rican meals, and is usually accompanied by meat or fish,

vegetables, and plantains or other fruits. Costa Ricans also typically do not eat to excess with a few large meals, but will eat several, smaller meals throughout the day. Lunch is the biggest meal of the day for Costa Ricans, which gives them energy during the day, instead of having dinner as the biggest meal, which provides a lot of energy

right before one goes to bed.

Beginning earlier this month, 5th-7th, the Ruta de los Conquistadores is a 3 day long bike trek. It is broken up into 3 stages, each named after a famous conquistador. Each stage follows the path of the conquistador it is named after. Although contestants currently will have only 3 days, it took the original conquistadores 20 years to complete this journey. 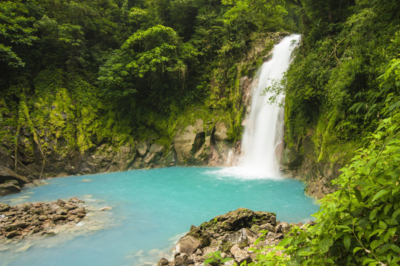 The Ruta de los Conquistadores has consistently been ranked as one of the most difficult mountain biking events, as well as one of the toughest races in general, in the world. This year will be even more adventurous, as an optional rafting detour on the Pacuare River has been added. In total, the 3-day bike trek will have participants traveling more than 160 miles, and climbing more than 25,344 feet. It is no wonder that the healthiest country in Latin America would be hosting this feat of extreme endurance and adventure.

Whether they are engaging in the epic Ruta de los Conquistadores bike race, or relaxing and enjoying the pura vida lifestyle, it is easy to see how Costa Rica ranks as the happiest and healthiest country in Latin America.

Costa Rica is also known for its excellent and affordable health care system. Read about it more here